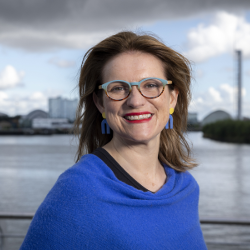 Catherine Stihler OBE has been an international champion for openness as a legislator and practitioner for over 20 years.

Born in Scotland, Catherine was educated at the University of St Andrews, where she was awarded a Master of Arts (MA) with Honours in Geography and International Relations, and later a Master of Letters (MLitt) in International Security Studies. She also has a Master of Business Administration (MBA) degree from the Open University. In October 2014, Catherine became the 52nd Rector of the University of St Andrews, and today serves as the Chair of the governing body, University Court. In 2018 she was awarded an honorary doctorate (DLitt) in recognition of her service to the university.

Catherine was elected Vice-Chair of the European Parliament’s Internal Market and Consumer Protection Committee, founded the Campaign for Parliamentary Reform and the Parliament’s All-Party Library Group, and was instrumental in securing graphic health warnings on cigarette packets across the EU.

In 2019, Catherine was awarded an OBE by Her Majesty the Queen in recognition of her services to politics. That same year, she stood down from the European Parliament to become the Chief Executive Officer of the Open Knowledge Foundation. During her 18-month tenure at the Foundation, Catherine redefined its vision and mission to produce a new strategic direction, re-engaged its global chapters and increased the worldwide profile of the organisation.

In August 2020, Catherine was appointed Chief Executive Officer of Creative Commons, a non-profit organisation that helps overcome legal obstacles to the sharing of knowledge and creativity to address the world’s pressing challenges.