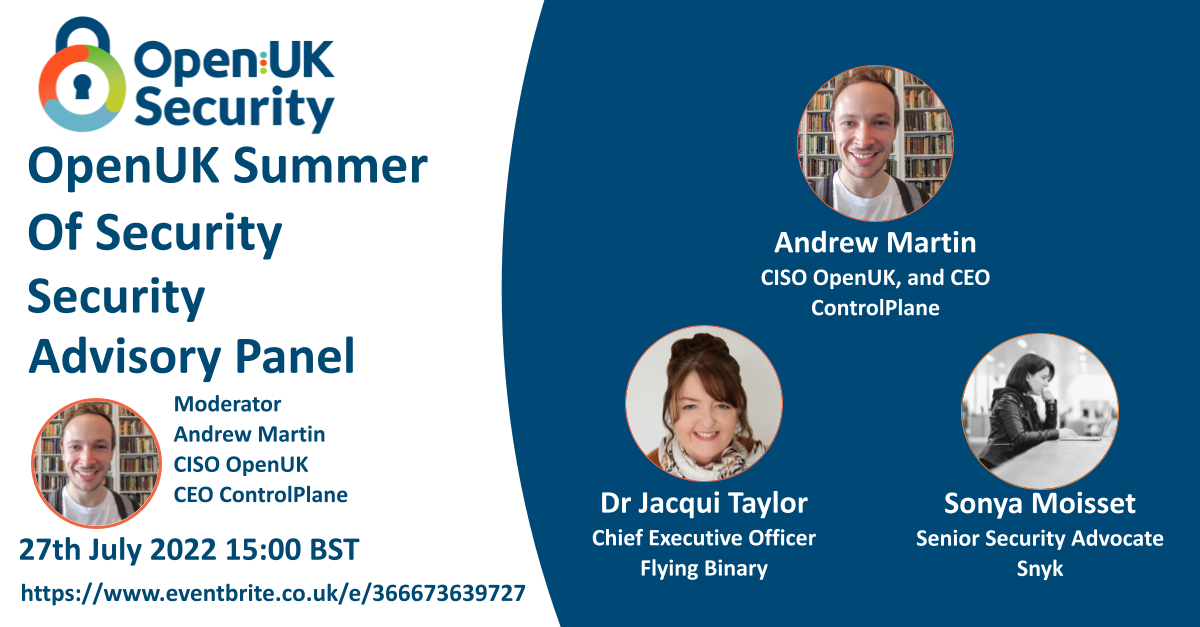 Andrew Martin – An incisive security engineering ethos gained building and destroying high-traffic web applications. Proficient in systems development, testing, and operations, he is at his happiest profiling and securing every tier of a cloud native system, and has battle-hardened experience delivering containerised solutions to enterprise and government. He is CEO at https://control-plane.io.

Dr, Jacqui Taylor – As #15 Most Influential Woman in UK Technology and 21 Most Inspiring Women in Cyber she was awarded an Honorary Doctorate of Science in recognition of her international web science work on inclusion for the Industrial Internet of Things (IIoT). One of the 250 Founders of Tech City, in 2016 she pivoted her company FlyingBinary to meet the challenges of the Metaverse and the Industrial Internet of Things (IIoT) with spectacular results.

She is recognised as one of the 100 Global Leaders, is a Top Ten Global IoT innovator, and an independent industry analyst for IIoT. An Expert Advisor to the European Commission in a Fire-Starter role for the Future Digital Economy, with a specific focus on innovation and improving the health and well being outcomes for 450 million citizens. A Top 20 UK Impact entrepreneurs, most influential UK web scientist in 2021, Top 34 IoT Influencers on Twitter. Shortlisted for a Cyber Security industry award she was invited to speak in Davos on the future of the Cyber Security Industry.

Globally recognised as the world’s first Smart City Tsar, and a Strategic Advisor to the UK Government, Cities lead on Digital Built Britain, Principal UK Expert lead for BSI international team for Technology, Data, Smart Cities and AI. She has recently taken an appointment back in the UKs Cabinet Office to create the Open Standards for the UK Government and is an Expert Advisor to the United Nations for the 2030 plan.

She has founded the Empathy Economy to share the secrets of her global success plan with entrepreneurs via a unique membership offering. The Empathy Economy Online launches in 2022. She has personally committed to support 1 million entrepreneurs with resources to meet the challenges of a post Isolation Economy and transition them to grow their companies in the IIoT.

A Senior Security Advocate and a lifelong traveler who lived in the Middle-East, North Africa and Asia. Always looking for new challenges – she made a career change from International Business Consultant in Tunisia, Saudi Arabia and Singapore to Full Stack Software Engineer in South Korea to Cybersecurity in the United Kingdom.

She’s passionate about Open Source, DevSecops and Cloud Computing. She’s the founder of Epic Women in Cyber and Epic Women in Tech, two initiatives to showcase women in the tech and cyber industries. She is an ambassador for Girlcode, OpenUK, and a GitHub Star.

Sonya is a DevSecOps/Cloud Security Advocate and a public speaker in the world tech scene. She is also a mentor for women in tech, a cybersecurity writer for FreeCodeCamp publications and an active member of the tech community in the UK.