Why State of Open Con is for you! 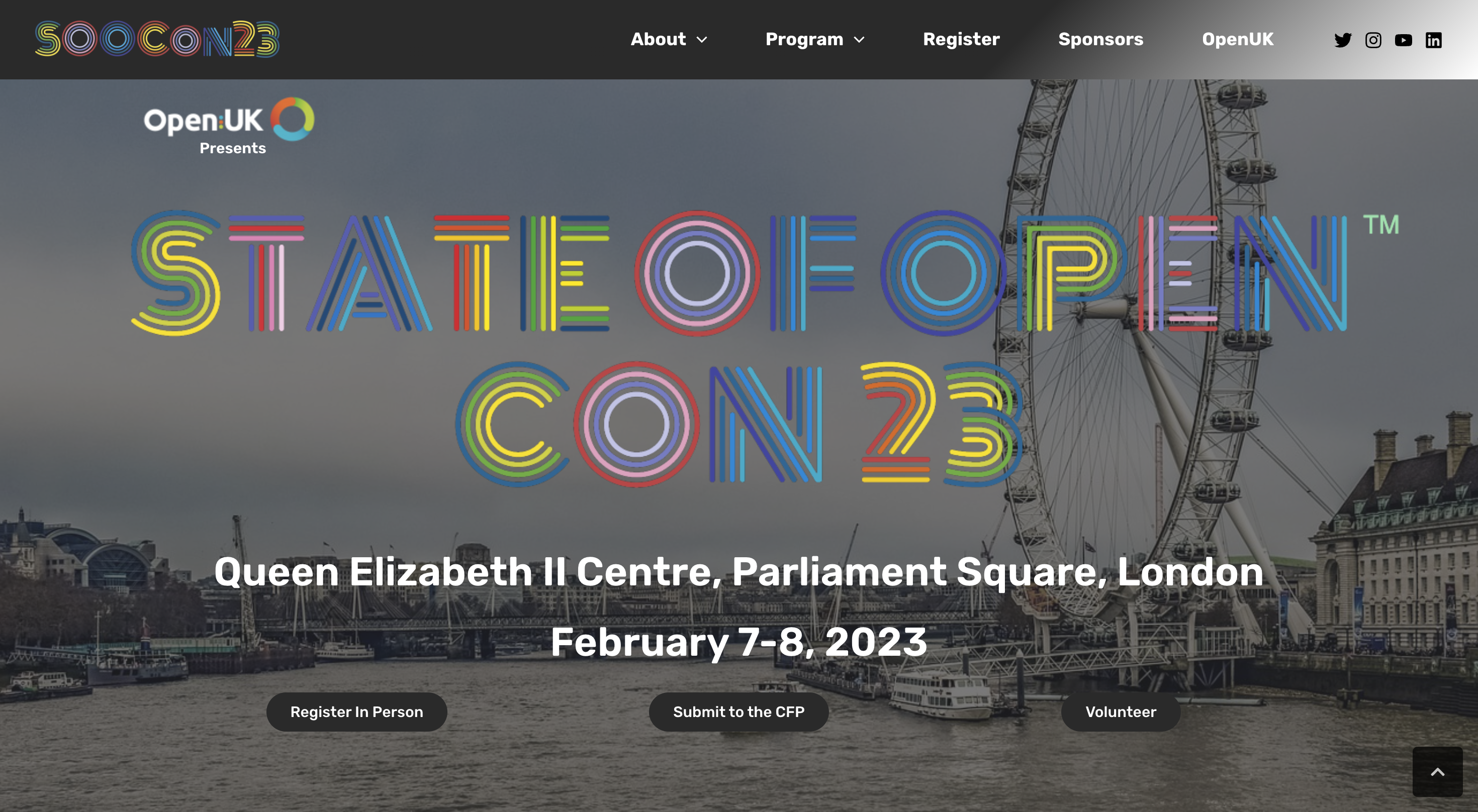 If open source makes up at least 70% of technical stacks, that means it has the ability to touch billions of lives. Using, contributing to and distributing open source software comes with great responsibility. Many problems that are reflected around the world have both the potential to be solved or amplified by open source.

This, the U.K.’s first Open Technology conference, acts as the global launchpad for the future of open source software, open hardware and open data in 2023 and beyond. To bring together everyone who matters — or should realise they matter — in Open Tech to work on what’s really important.

We wanted to give you a glimpse into what this revolutionary event will look like from the inside, in hopes that you and your team will consider joining us 7 and 8 February in London.

The Future of Open Source Software

State of Open Con’s definition of the future of open source software does not just include businesses, but the public sector, government, open source strategists, NGOs and the United Nations, as well as citizen developers, maintainers and contributors. Like everything with this inclusive event, the definition of open source contributor also is broadened to not only include developers, but doc writers, developer relations, ethics advisors and other important community members that don’t always have GitHub stars, but they have ours.

Our CEO Amanda Brock will host the keynote plenary discussions which will consider the future of open source software. Focusing on its users – the businesses and public sector building their infrastructure on it – and the need for maturity in end user curation, maintenance, funding and resourcing of open source software. The plenaries will engage The United Nations, governments, sovereign funds, philanthropists and others whose focus must shift to a joined up international response to the needs of open source. This is a conversation every participant in open source software should hear.

Keep your eyes peeled for the special programme set to launch the second week of January.

This sixth track warrants its own section. For many the biggest challenge of open source — trying to build a community-first, free and open business. The track supports both start up entrepreneurs and those building the skills for an open source business. It includes dozens of successful open source founders to coach and mentor the next generation of entrepreneurs and business people. Each of five sessions in this track kicks off with a 45-minute panel, followed by 45-minute roundtable discussions hosted by those founders, looking to kick off long-term mentoring relationships and to answer the many questions of the business of open source:

We’re excited that open source startups like yours will gain unprecedented access to founders, contributing to the sustainability of the future of open source.

The Unconference and Delegate Experience – DX

Not everybody wants to spend two eight-hour days sitting in a conference room looking at slides — does anyone actually? We are intentionally creating an event which has as much space to hang out — even in teepees around a fire pit…across from Parliament square — as it does for more traditional learning and networking.

Our unconference track beats to its own drum — well, your drum, really. Two fully self-organised, participant-driven days of activities and collaboration, that you are invited to drop in and out of. Bring an idea or just vote for someone else’s.

An unconference always serves to break the conference mould, which is why this track is facilitated by the inimitable and creative Paula Kennedy, Hannah Foxwell and Terence Eden.

We’re not just aiming for an inclusive-in-name-only event. We are building the event to match up with the Linux Foundation’s CHAOSS Diversity & Inclusion Event Badging Goals:

With this intentional diversity, equity and inclusion in mind, we will not be having a DEI track or session because, as our chief DEI officer Nicolas Vibert put it, “only the people who are actively interested in DEI attend these sessions.”

Won’t you join us?

If technology is our future and open source is its backbone, we must constantly consider the future we are building and who is participating in it. Let’s build that open future together.

We don’t pretend to promise that this will be a perfect event. But we do believe it’ll be a unique, memorable experience.

See you 7 and 8 February 2023 at the Queen Elizabeth Centre II in London. Get your ticket now.