Leanne Kemp Picking up the Sustainability Mantle at OpenUK 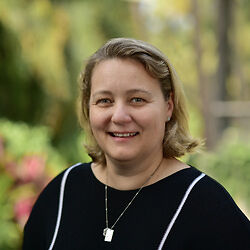 Leanne Kemp
2nd December 2022
Resources
OpenUK, thank you for tapping on my shoulder. It’s an honour to be the new Chief Sustainability Officer at OpenUK and to lead its strategy around this in 2023. This will include my working to ensure that sustainability (as well as DEI) span the full agenda at OpenUK’s recently announced first conference,  https://stateofopencon.com/. I expect this to pick up on OpenUK’s COP26 event last year.
Open Technology – open source software, open hardware and open data – along with open standards can be a powerful tool to address urgent problems such as climate change, nature, or the environment and strongly align to the United Nations Sustainable Development Goals.  It encourages collaboration and facilitates the sharing of key information and collective equity. There are many similarities and great alignment between Open Source Software and society’s role in creating a sustainable future. To foster sustainable change, all sectors including government and business must adopt an open approach. They must also work together to achieve a common goal and collective impact.
This will undeniably be the key to achieving the ambitious Sustainable Development Goals. It is important to work together in creating an atmosphere that is not purely driven by competition but where Open Source collaboration is the heart of our innovation. Although it may be possible to solve any local problem in an open manner, the ultimate goal of problem solving is to bring peoples together to improve the organisation and serve the people globally. Open Source, is essential for people to see the world from another perspective. It is important to be inclusive and more open-minded in our approach and engagement, to develop this alignment between Open Technology and the Sustainable Development Goals.
Climate emergency is not confined to any one country.
It is a global problem that crosses borders. This problem can only be solved with international cooperation and openness. It is possible to understand and empower the distributed intelligence of the Open Source Software community to find a “solution army”. This can be done by allowing them to share information-based innovation to create a collective advantage. It is possible to create new economic models and preserve Open Source software. It is important to consider open data, Open Source software, and open hardware. This will help us achieve our net zero goals, and create a circular economy.
At COP27, Egypt November 6-18th:  Developing countries repeated their calls for the establishment a loss and damages fund to compensate countries most at risk from climate catastrophes but who have not contributed much to the climate crisis.
Observers warn that the inclusion of “low-emission” energy in the future’s energy sources is a major loophole. The undefined term could be used against the UN Intergovernmental Panel on Climate Change (IPCC) or the International Energy Agency.
Giving most exciting Open Source advancement was the announcement from Al Gore, a former Vice President of the United States and climate activist, presented , with the support from the UN Secretary General, a new independent inventory of greenhouse gas emissions created through the Climate TRACE Coalition.
This tool uses satellite data and artificial Intelligence to display the facility-level emissions at over 70,000 locations around the globe, including those in China, India, and the United States. Leaders will be able to see the extent and location of methane and carbon emissions that are being released into the atmosphere.
At COP27, I spoke about how redefining sustainability could help to solve these problems. We encourage, support and build “The Three Opens”, a fundamental set of principles for Open UK. Open source software is an international centre of excellence in the UK. We believe an Open-Source-inspired strategy to reduce carbon emissions will encourage widespread collaboration. My leadership will allow me to align stakeholders over this year.
This was the first COP that had a day dedicated to Agriculture. It contributes to a third to greenhouse gases and should be a key part of the solution.
Other initiatives were announced at COP27 include:
1.  Sharm El-Sheik Agenda for Adaptation
2.  Action on Water Adaptation and Resilience Initiative
3.  African Carbon Market Initiative
4.  The Insurance Adaptation Acceleration Campaign
5.  The Global Renewables Alliance
6.  The First Movers Coalition Cement & Concrete Commitment
Antonio Guterres’ words serve as a reminder for all of us, especially during difficult negotiations: “Humanity must decide whether it wants cooperation to perish.”
We are looking now to our work in 2027, starting with #stateofopencon and progressing to COP28 in November, both of which will see us make Sustainability announcements.
Share