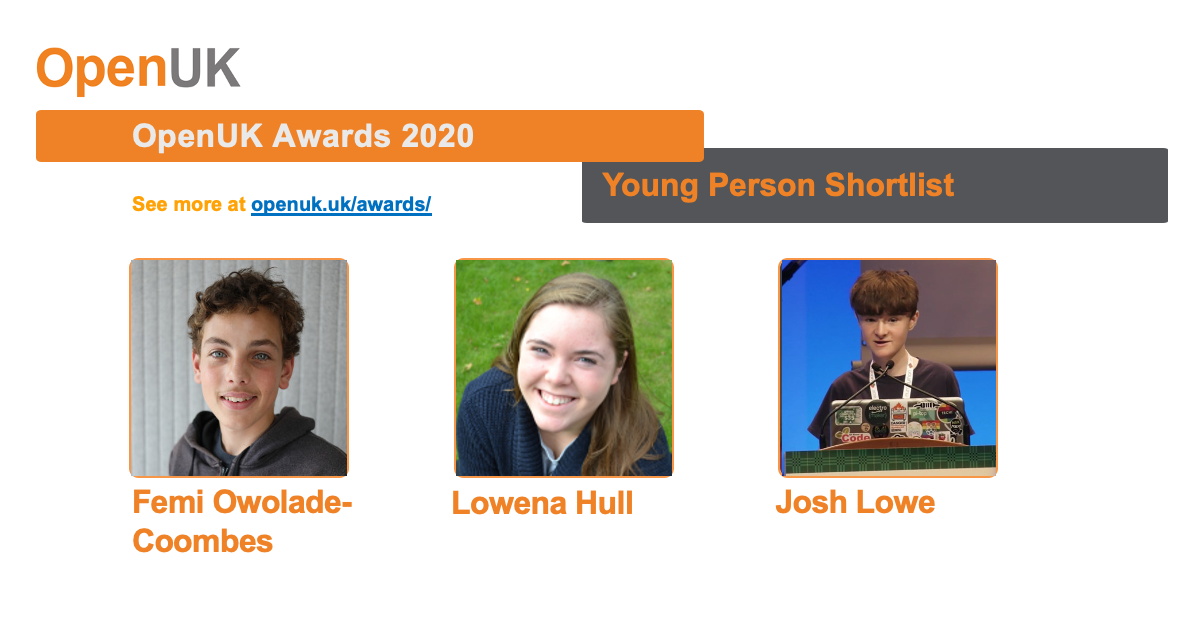 31st July 2020 – London, UK – OpenUK, the Open Technology advocate organisation for Open Data, Open Source Hardware and Open Source Software in the UK, today announced the shortlist for its first annual awards. Based on more than eighty entries across six categories, the Awards showcase the breadth of innovation and expertise taking place across open technology in the UK.

The award shortlists were created by the judging team put together by OpenUK. The judges:

All of whom were ably wrangled by Jonathan Riddell, KDE Plasma Developer at Blue Systems and Awards Committee Chair.

“The nominations have been outstanding! I am thrilled to review so many contributions to the open-source landscape, outlining a strong current towards the expansion of open communities while defining the best practices in the industry. This is a great opportunity to recognize and celebrate the far extending impact that numerous individuals and companies had on the open-source ecosystem,” said Katie Gamanji.

“Although there were strong entries across all the categories, what really stood out was those for the Young Person Award. This is the first generation that have grown up through school and university with open source as the de facto mode of software development, it is inspiring to see the breadth of contributions here. The future is in safe hands,” added Henry Nash.

“ Thank you to everyone who nominated in this year’s Awards making this such a great first year. We have a very special ceremony coming up digitally on 20 October thanks to the sponsorship of Bristows and our award trophy sponsor Garner Osborne. We have a couple of tricks up our sleeves to make this a really great celebration worthy of the incredibly high caliber of candidates and celebrating UK leadership in open technology. Details to register to join the ceremony will be shared in August. ” Amanda Brock, CEO, OpenUK

The Award category shortlists are as follows:

To find out more about the Awards, or for any other questions, contact OpenUK on awards@openuk.uk.

OpenUK is the industry advocacy body promoting Open Technology being open source software, open source hardware and open data across the UK. As an industry association, OpenUK gives its participants greater influence than they could ever achieve alone. OpenUK is committed to supporting collaboration between businesses, public sector organisations, government and communities to expand the opportunities available to all around open technology. It is building on its three pillars, creating a cohesive and loud Open Technology community, ensuring the UK’s laws and policies work for Open and promoting learning in Open Technology.

OpenUK is a not-for-profit company limited by guarantee, company number 11209475.