10th July 2020 – London, UK – OpenUK, the advocacy and industry organisation for Open Technology in the UK, today announced that it has joined the Open Source Initiative (OSI), Linux Foundation, the Eclipse Foundation and the Open Compute Project (OCP) Foundation as well as entering into a partnership with the Open Hardware Group and a Friends arrangement with the Open Data Institute. The organisation will participate in these bodies to support their goals around open source software, open hardware and open data development across the world.

In addition, Amanda Brock of OpenUK has joined the KDE Advisory Board, bringing her skills and experience around open source, governance and community development to the organisation.

OpenUK is building on its mission to represent the open technology community in the UK and develop more opportunities for UK individuals, projects and companies to be successful around the world. This is based on a mix of community engagement, education reform and campaigning on issues that are dependent on the role of open technology for their future success.

“It goes without saying that open source and open culture are global phenomena, and while there are shared issues we can collaborate on, there’s so much variation around the world that we really need strong homegrown advocates like OpenUK. As such, the Open Source Initiative is pleased to formalise our partnership with OpenUK and are eager to support their mission,” commented Josh Simmons, President, at OSI.

“We are excited to have OpenUK join the Eclipse Foundation and support our mission around open source software. Our approach is based on maintaining a community environment for open source that is mature, business-friendly and scalable over time, and these goals mesh well with the ambitions that OpenUK has for open source and open data companies in the United Kingdom and around the world. We are looking forward to our future collaboration around open technology,” said Mike Milinkovich, Executive Director at the Eclipse Foundation.

“It’s such a unique opportunity to partner with an organisation like OpenUK that is at the forefront of driving open infrastructure conversations across the UK.  Amanda and the entire team at OpenUK truly understand the importance of open hardware and its role in creating a holistic open ecosystem.  Additionally, it’s great to see the breadth of their efforts across the UK including private and public sector engagements and most notably, educating the UK’s next generation of IT students on open source,” said Steve Helvie, Vice President of Channel, OCP.

“Open source development benefits all organisations and individuals that get involved, delivering faster collaboration and providing a platform for open hardware innovation. At OpenHW Group, our aims around open hardware development and the community we’re building fit well with the objectives that OpenUK has in place, so we are pleased to be collaborating with each other,” commented Rick O’Connor, President and CEO, OpenHW Group.

Amanda Brock, CEO at OpenUK stated: “We are expanding our partnerships across the open technology ecosystem to develop how we represent the needs of individuals, projects and businesses involved in open technology. By working together in this way, we can provide a voice for companies in the UK internationally around why the UK is a great location for open business, why UK talent is developing around open themes, and will ensure that we continue to have a seat at the table around decisions that will affect the development of the industry for years to come.”

OpenUK is the industry association representing Open Technology being open source software, open source hardware and open data organisations across the UK. As an industry association, OpenUK gives its participants greater influence than they could ever achieve alone. OpenUK is committed to supporting collaboration between businesses, public sector organisations, government and communities to expand the opportunities available to all around open technology. It is building a visible community, ensuring the UK’s laws and policies work for Open and promoting learning in Open Technology. OpenUK is a not-for-profit company limited by guarantee, company number 11209475. 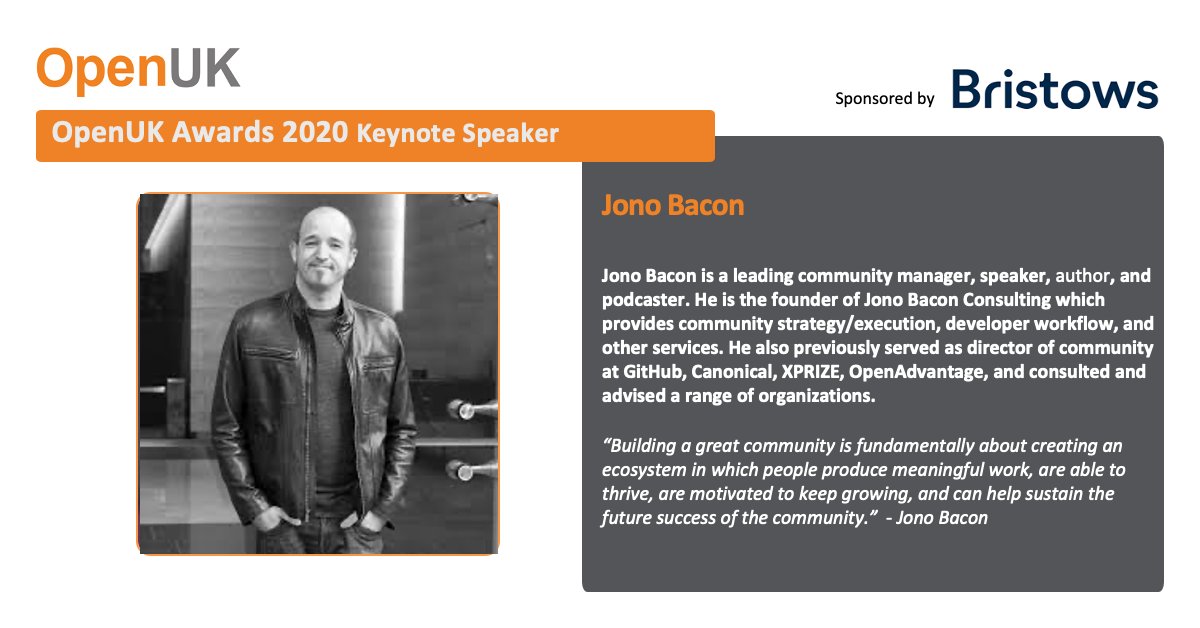 OpenUK
@openuk_uk
1 hour ago
20.10.20. The day is finally here. Tonight we find out the winners of our #openukawards and celebrate UK leadership in open technology. #opensource https://t.co/sQ4buYiTyI 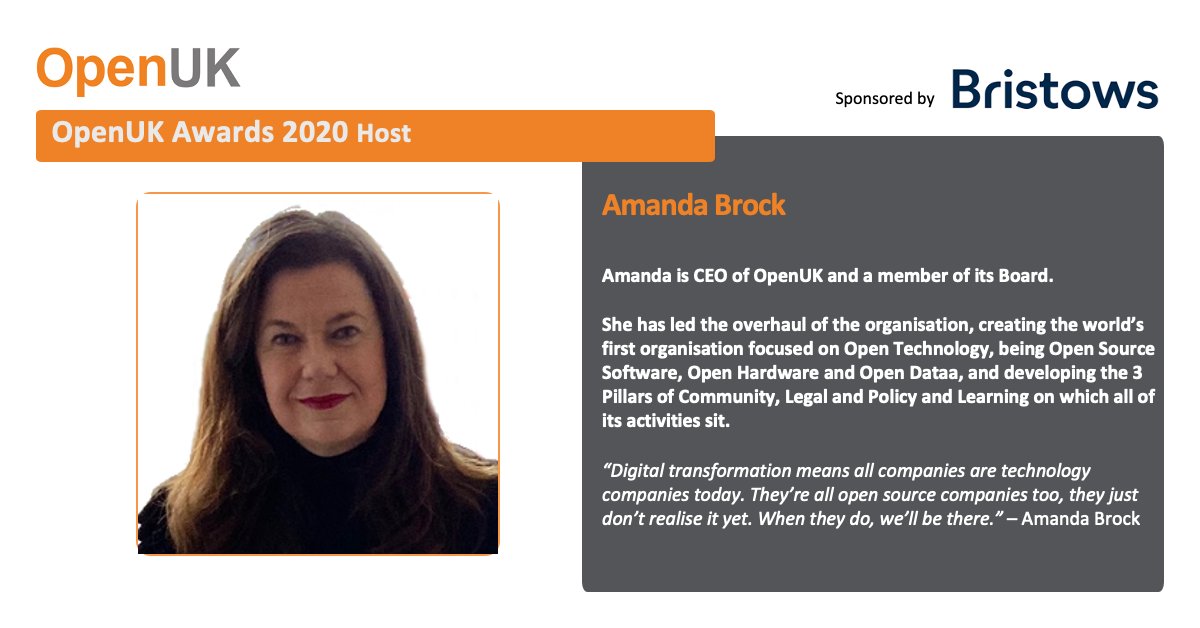 OpenUK
@openuk_uk
12 hours ago
And who will decide the winners of the #openukawards? The panel of Judges, @JeniT @henrynash and @k_gamanji Thank you We look forward to celebrating your decision tomorrow. https://t.co/ftmlNuZxuz 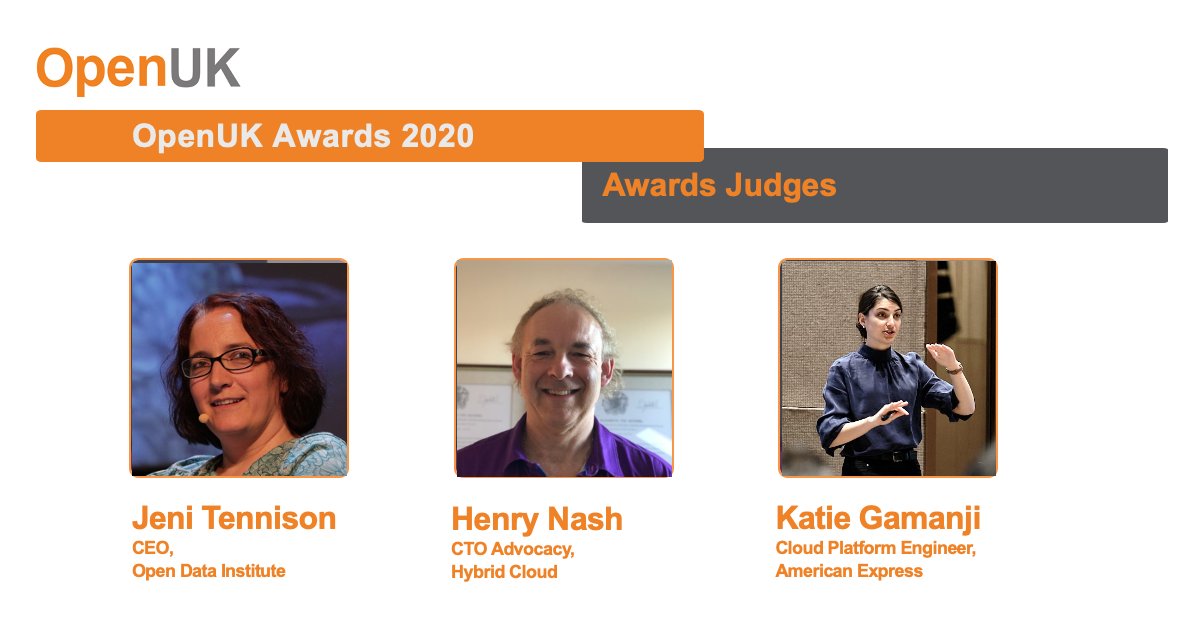 OpenUK
@openuk_uk
12 hours ago
Last but not least, the shortlisted nominees in our Open Hardware category of the #OpenUK Awards @FossiFoundation @lowRISC @embecosm. Congratulatons on being shortlisted and wishing you all the best of luck, https://t.co/n11Ll02RiL 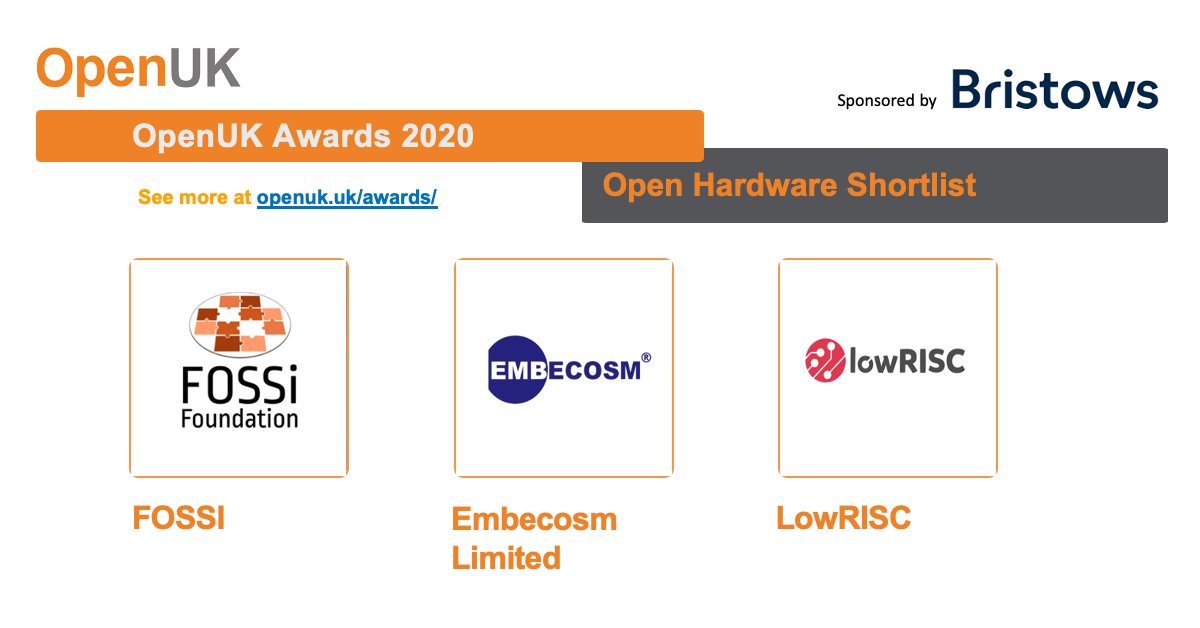 OpenUK
@openuk_uk
12 hours ago
Who will take the trophy in the Open Data Category of the #openukawards? All will be revealed tomorrow evening. In the meantime wishing the shortlisted nominees @NLWales @ODIHQ and @IcebreakerOne the best of luck. https://t.co/cwA8OY2zOy 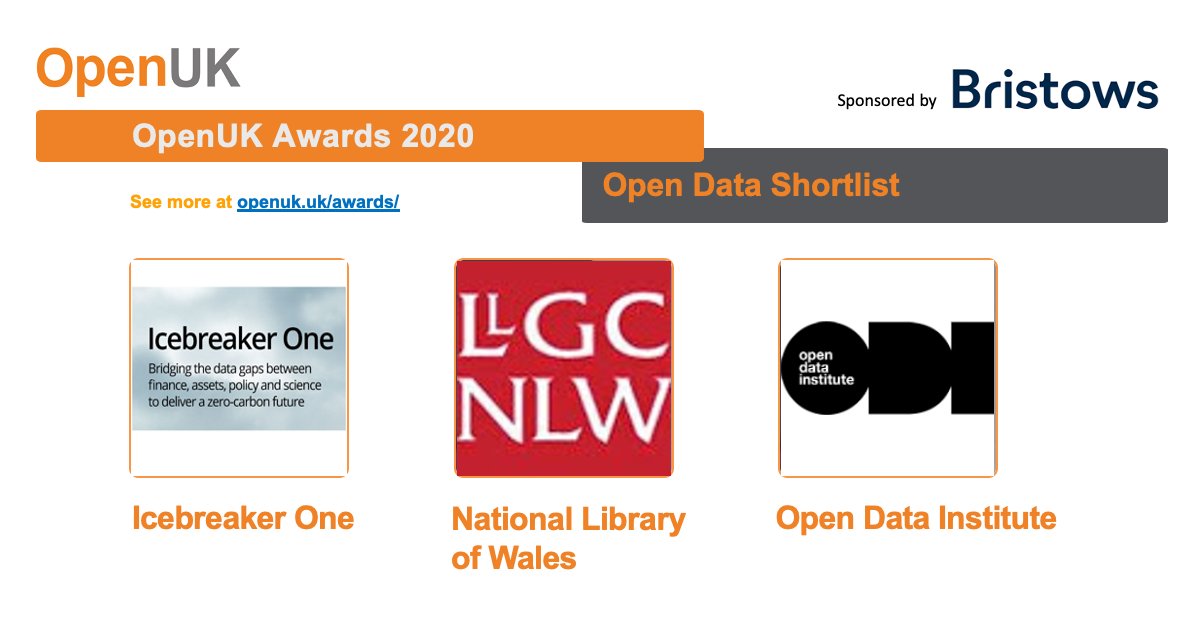 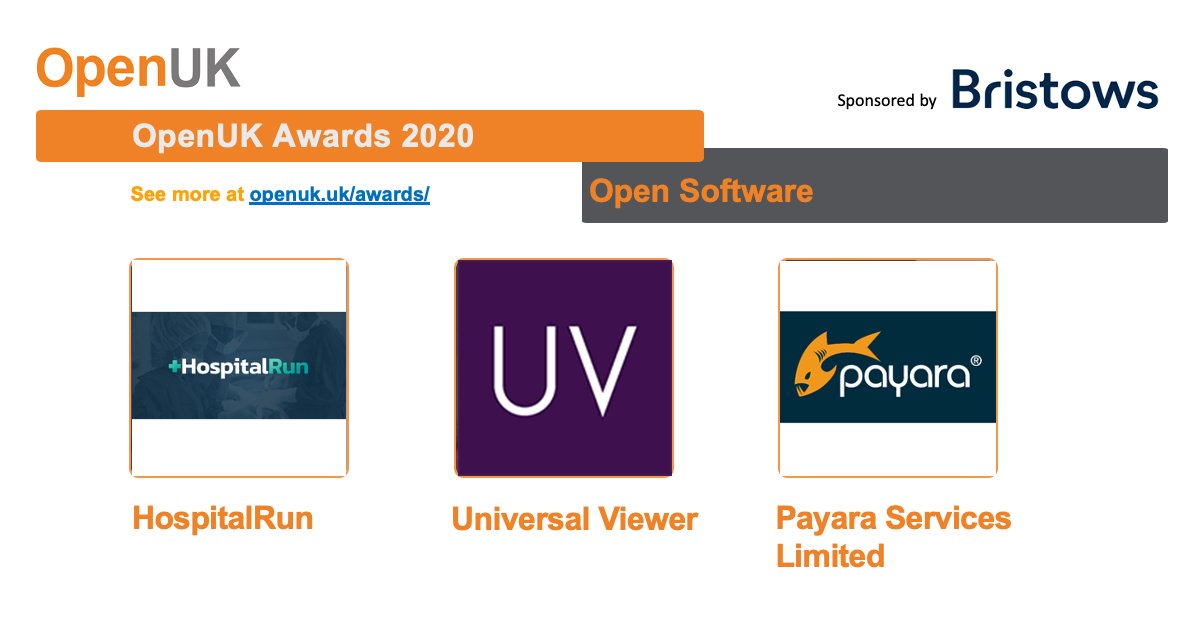 OpenUK
@openuk_uk
21 hours ago
Not to be outdone by the juniors.... some of the UK's most talented open technologists made the shortlist for the #openukawards @Fyne_io @ntoll @lizrice #opensourcesoftware #openhardware #opendata Good luck to the shortlisted nominees. Can't wait to find out who has won.... https://t.co/1HXT5v2Lpj 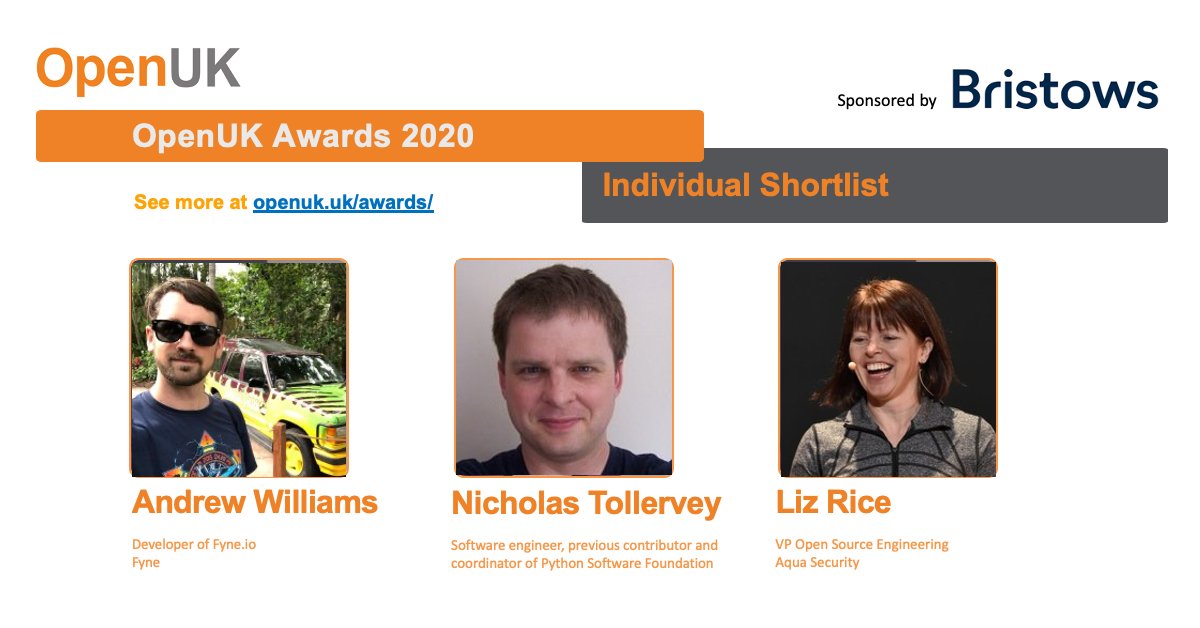 OpenUK
@openuk_uk
1 day ago
We'll find out tomorrow which of these young people wins the #openukawards "Young Person Award" - @hackerfemo @LowenaHull and @all_about_code. An amazing group giving hope and inspiration for the future. Developing UK Leadership in #Opentechnology. Best of luck to you all. https://t.co/XapEaz0B5t 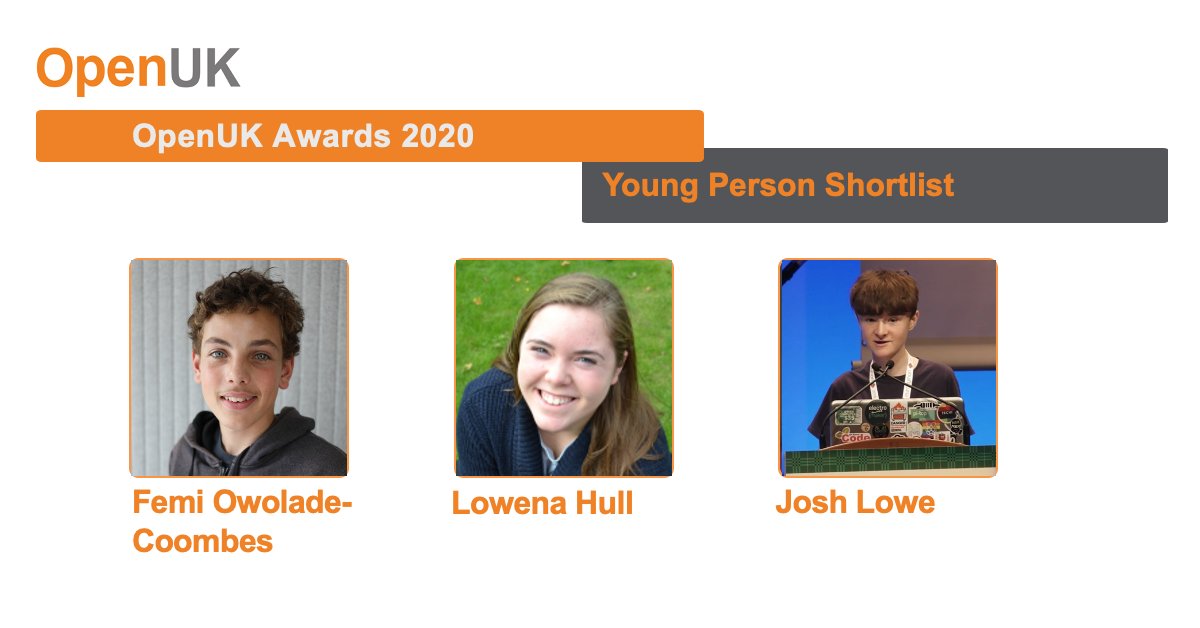 OpenUK
@openuk_uk
1 day ago
2 days to go, until we discover who has won the #openukaward for Finance and Fintech from the shortlist of @neuedaltd and @ParityTech Good luck to both finalists. Thanks to @FINOSFoundation for their Sponsorship of this Award @mcleo_d #opensourcesoftware #fintech https://t.co/rB1BP9hHtA 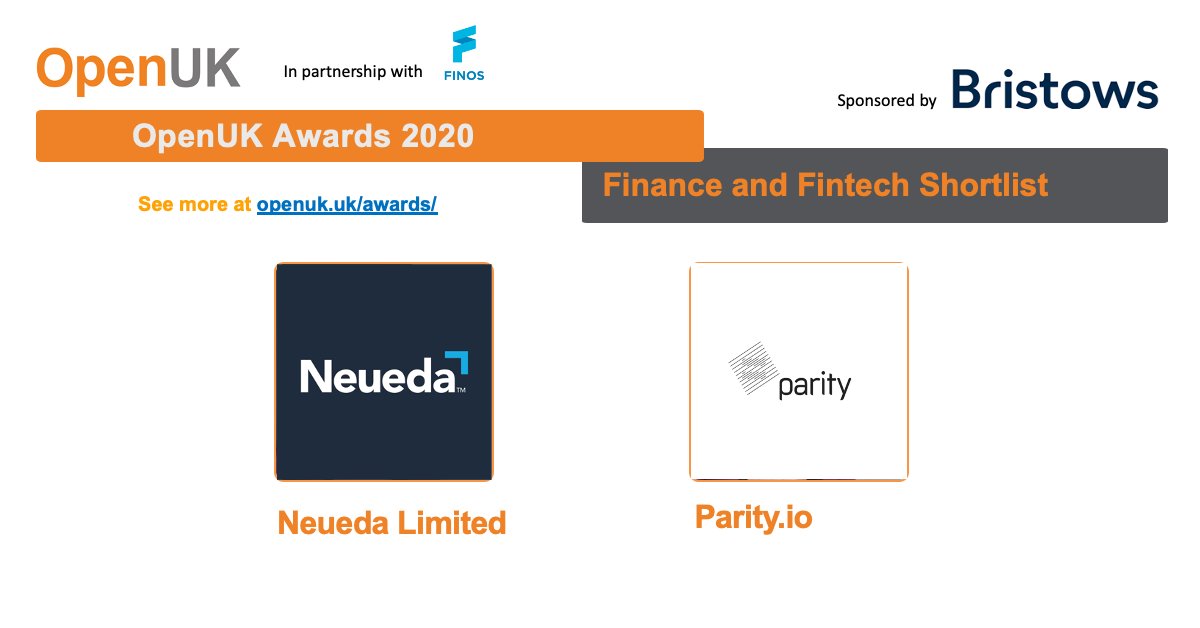 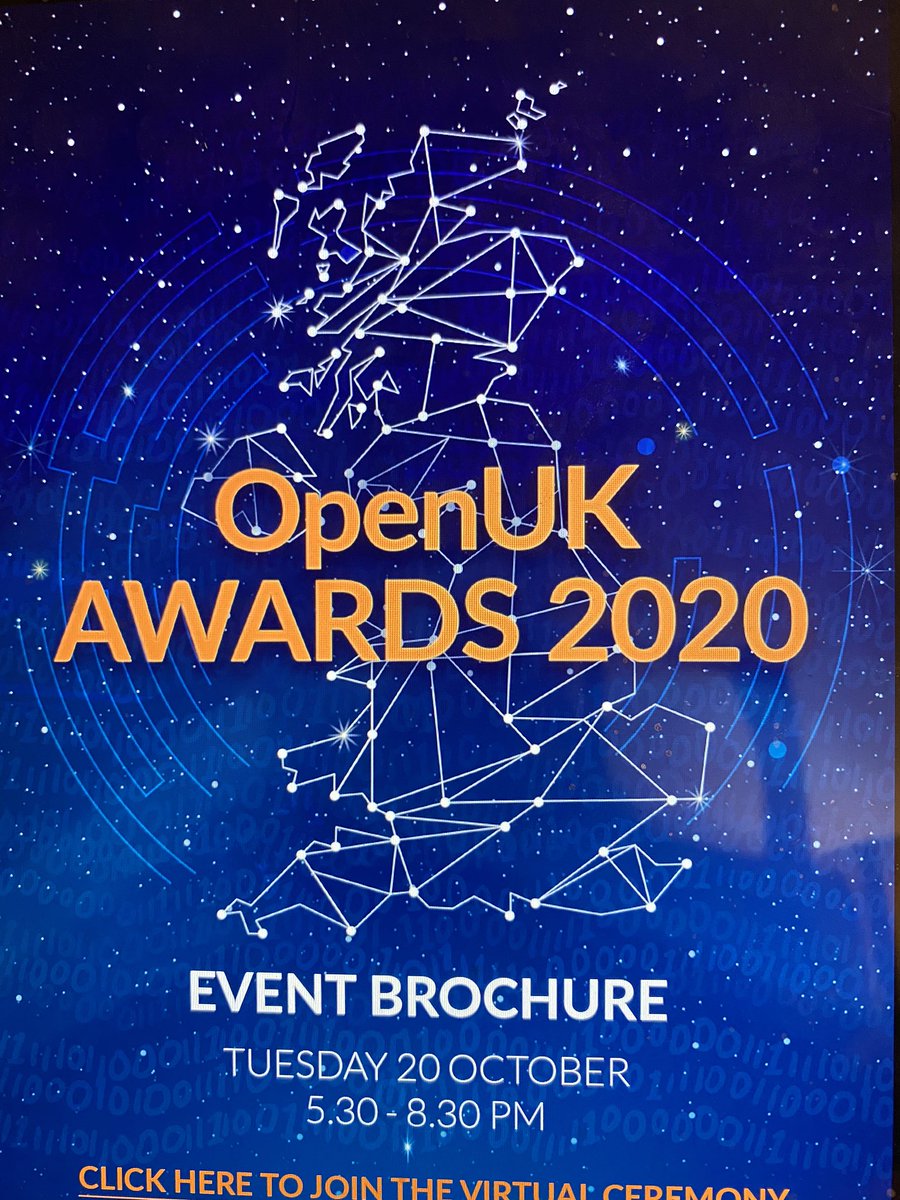