DG Connect: Open Source 2020 and Beyond 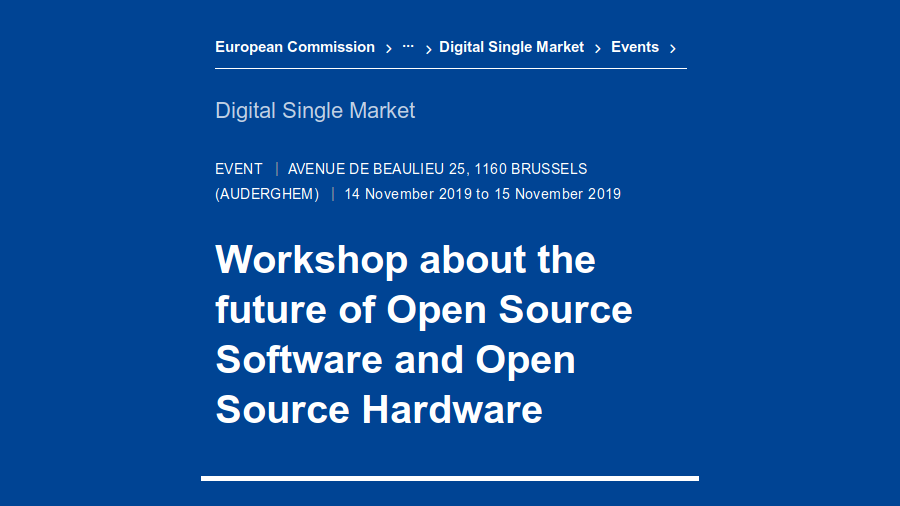 The European Commission is taking Open Source, Open Hardware and Open Data seriously and recognising the need to take real and defined steps to move forward to the ‘open source first’ objective of the Tallinn Declaration.

To this end, 14 and 15 November saw DG Connect launch their #OSSbeyond2020 initiative with a two-day workshop. Originally planned for 20 people, the Commission received 10x that number of applications to attend and those attendees lucky enough to get a spot found themselves with standing room only where the group were not divided into workstreams. 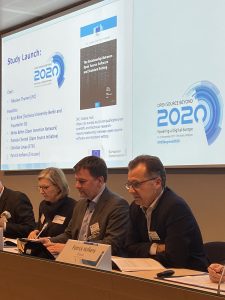 With 7 workshops and a keynote by NL Net’s Michiel Leenaars, the full event will be available to download shortly and the full agenda published on the Commission website.

By their own admission, the Commission is still in a discovery process but widely commended by attendees for being rigorous and focused in this process.

It’s not easy to summarise two full days of panels and talks into a few hundred words but here are some of the highlights….

Pearse O’Donohue, pointed out the current difficulty in valuing open source assets, and that accountants do not know how to do this. The importance of valuation and the “patent problem” faced with the VC’s cannot be underestimated by our open business communities. OpenUK will be actively looking to find some practical solutions to this in 2020 and will look to engage with business in that process. 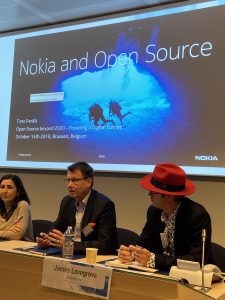 Red Hat’s head of their Open Source Office, Deborah Bryant, pointed out that even Big Blue (IBM) itself, understands that proprietary models are of the past and no longer sustainable; Open Source is clearly the way forward.

It’s no surprise that there was much discussion of what Open Source is and what it means to be open, associated business models and protecting and developing the 1000’s of SME’s wrapping themselves around Open Source. Open Source is not just a licence, it’s about community and collaboration. But we do have to remember that without an open licence attached to it, software is not Open Source.

Community and the need to protect and preserve this, to transform customers into contributors and an understanding of the stages of that process, were raised across a number of discussions. Sebastian Bergmann, creator of PHPUnit, pointed out that “Github stars” don’t put food on the table, a problem across our constituency of volunteer contributors and a recognition of the need for financial contributions from corporate users, for them to be good citizens in this space.

Frank Karlitschek, Founder, Nextcloud explained the “unusual” Nextcloud model, with a community of 2000 contributors and where Nextcloud the business directly competes with other companies to provide services around its own “Nextcloud Open Source product”. With circa 50 employees this SME provides services to major companies and governments including the European Commission.

There was some debate over terminology and the (potentially inappropriate) use of the term “Vendor” where Open Source Software is not “sold” but is freely distributed and there was very definite clarity that terminology needs to be agreed by this Community with the Commission to be applied in a consistent manner creating clarity in both process and future legislation. This will also require a clear and documented understanding of business and operational models around Open Source.

Carlo Daffara, CEO, NodeWeaver, explained that Open Source is an ecosystem like an ecological ecosystem and the controversial importance of “parasites” to that ecosystem.

Gael Duval, Founder, Movidia, raised the issue of risk, which is not something to fear, but something to manage and to understand our transparent Open Source Software and communities will be easier to manage from a risk perspective over time. However we need to go through a process of creating clarity and good practise around this. The ongoing process with the Commission in 2020, will be an important part of this process for Europe.

The importance of Open Hardware and Open Data was not overlooked and a number of panels focused on these. Data models need to be better understood as does the threat of big tech around these. Europe is not a leader in Cloud, but has the opportunity to lead the Edge.

Mirko Boehm and Knut Blind, launched the conclusions of their report, Open Source and Open Standards funded by the Commission.

The UK was represented on two panels by OpenUK Chair, Stuart Mackintosh and we hope to see more UK representation in the ongoing process.

The Commission is encouraging the open communities to participate in this ongoing process and to contribute lists of issues and proposed solutions to this process.

You can further engage with the commission by email at: DIGIT-OSS-STRATEGY@EC.EUROPA.EU or via the Open Source Observatory on Joinup.

OpenUK will continue to actively participate with the Commission throughout this process and encourage UKGov to follow the Commission’s example whatever the Brexit outcome.